“If at first you don’t succeed, try and try again.”

Learning a new skill requires a willingness to fail over and over again. You may never be perfect, but if you keep at it, over time, you fail less often. Before you know it, you become more consistent as you apply lessons from each attempt. Among the obstacles in your way are motivation and time. Given the right amount of motivation and thousands of hours you’ll progress from novice to proficiency and eventually to mastery.

We often don’t need to master these new skills and we eventually practice less and less. To practice beyond our early engagement, we need something to sustain the initial motivation. For some, curiosity, career opportunities, and a learner’s mindset are enough to draw you to a subject but without passion and discipline, these efforts quickly wane. Depending on how necessary the new skill is, this can be enough or leave you just short of your goal. The challenge for instructors lies in stoking rather than smothering motivation.

Facilitators and teachers can learn a lot about motivating the learning by considering the obstacles before them: passion, time, incentive, and embarrassment.   To overcome these obstacles, we must reframe learning and destigmatize failure. There is no better example of this than video games, namely Super Mario.

Photo by Pixabay on Pexels.com

In Super Mario you must dodge enemies, leap pits, and climb obstacles to save the princess. As you play, you’ll fail more times than you can count but many stick through these failures and reach the castle. Their motivation is sustained because, to them, succeeding is worth it. In this mindset, failure isn’t embarrassing or shameful, it’s a chance to learn and adjust. Maybe you jump sooner next time, or you run up to the gap instead. Stringing together these small successes allows you to learn. The motivation to succeed doesn’t end when you fall into the pit. We are no longer driven by the fear of failure and learn far more from the challenge.

How do we apply this?

In designing material to motivate through failure, we can:

For more information on the Super Mario effect, check out this TED talk by Mark Rober!

This week, we began a new initiative to launch the OCPortfolios website. This new tool will allow us to maintain and celebrate our learning environment while serving to connect our organization in a new way. Currently, we have so many incredible leaders and teachers whose talents may not be widely known. The field teams they work with are daily blessed by their skills but hundreds or even thousands of miles separate them from their fellow workers. This tool will allow us to make our skills and resumes not just visible but searchable to the rest of our organization, allowing for an increase in collaboration and mutual edification. As an added benefit, this tool will allow Personnel to keep up to date, digital, accessible records on our entire team making their lives easier and our documents cleaner!

We’re currently testing this program with about 25 OC employees and will keep you updated on the benefits and viability of the program. For now, here’s a screenshot of the database. Let us know what you think! 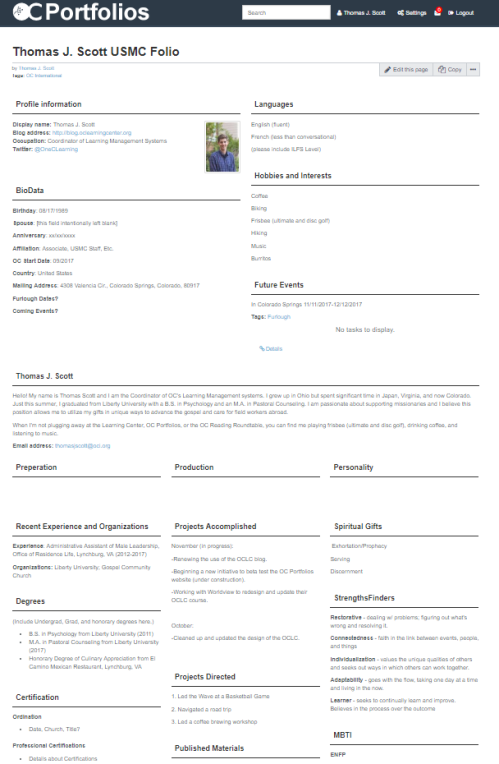 What’s New at the OCLC?

In a certain light, I’m what’s new at the OCLC. My name is Thomas Scott and I was recently hired as the new OCLC coordinator. I am excited to be a part of One Challenge and to maintain and curate the OCLC learning environment. If you have any questions, technical difficulties, or learning needs please let me know so I can help!

As we continue to grow as an organization and you continue to grow as an individual, there will be so many opportunities to learn and share wisdom. If you haven’t been to the learning center in some time, feel free to browse our courses to see what’s new; hopefully, you’ll find some useful lessons! When you think of something we can add, let me know and we’ll get to work on expanding our knowledge-base. Even more, if there is something you would like to teach I can help you plan the course and get the content ready for our organization to engage and grow.

Moving forward, I plan to use this blog to announce updates in the content of the OCLC. More than that, I’ll be sure to share what I’m learning as I grow in this new role and keep you in the know on learning events and opportunities around the USMC.

See you next time!